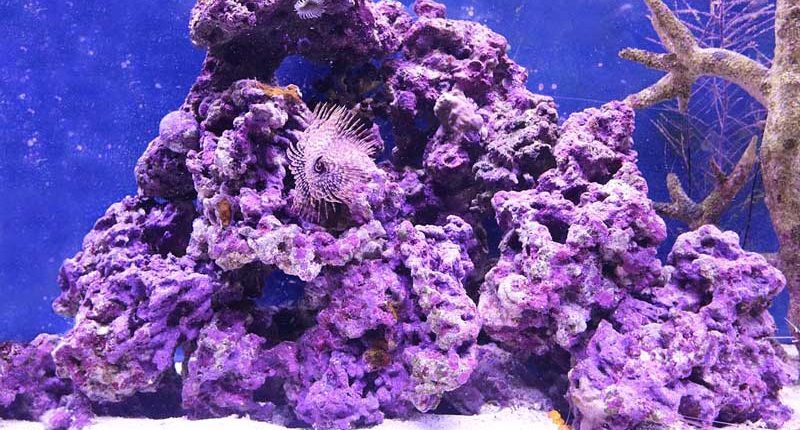 The role of Live Rock in an aquarium is a vital one. This guide helps to answer the many questions about what it is, why we need it, how to care for it, and how to select the best type for you.

What is Live Rock?

Live Rock is the broad taxonomic classification given to rock and reef structure which acts as a host to the many marine organisms that live on and within it. Live Rock is usually comprised of calcium carbonate but it can be made of many different materials including synthetic substances, concrete, and even the aragonite skeletons of ancient stony corals that have since passed on to the big aquarium in the sky. Live Rock is the foundation of our natural coral reefs in the oceans as well as for the aquariums and fish tanks in our homes.

Benefits and Purpose of Live Rock in your Aquarium

Live Rock serves many beneficial functions to the aquarium hobbyist, the most significant of which is its role as the biological filtration for your tank.  Aquariums are closed systems, all food put into the aquarium for your fish and other inhabitants must also exit the aquarium somehow.  Live Rock facilitates the means by which the food is broken down and exited out of the tank. Biological filtration is extremely important for the health and longevity of your aquarium inhabitants. You may ask how in the world does a rock do that,  I’ve never seen them move, let alone clean my tank. The process of breaking down food from entry to exit takes several steps and is part of the nitrogen cycle that is always occurring inside your aquarium.

Live Rock is a far more efficient filter than any powered aquarium filter which can not contain any anaerobic bacteria for waste conversion as this type of bacteria only resides in oxygen-less spaces such as inside the Live Rock and within deep sand beds.

Introduction of Life and Diversity

Live Rock contains a diverse ecosystem of life and is often the only manner in which to introduce such a vast array of species into a closed system such as your aquarium. Coralline algae, beneficial bacteria, filter feeders, pods, corals, and other small invertebrates are all contained on and within each live rock, all contributing to the overall water quality of the aquarium.  ARC Reef offers a version of Live Rock that has more life and critters than any other product on the market, check out our Premium Live Rock for Sale to read more about this option and how it can greatly increase the bio-diversity of our aquarium.

Habitat for Your Fish and Corals

Live Rock serves as a habitat and home to nearly all of the marine life in your tank.  It provides protection, shade, food, and even acts as a nursery. Live Rock provides the base on which all your corals will grow, and plenty of holes for your frag plugs to fit nicely in. Without proper habitat in your tank, your fish will be more stressed and susceptible to disease. The main goal is to try to replicate what you would find in nature, and having an adequate amount of Live Rock helps to achieve this very important goal. 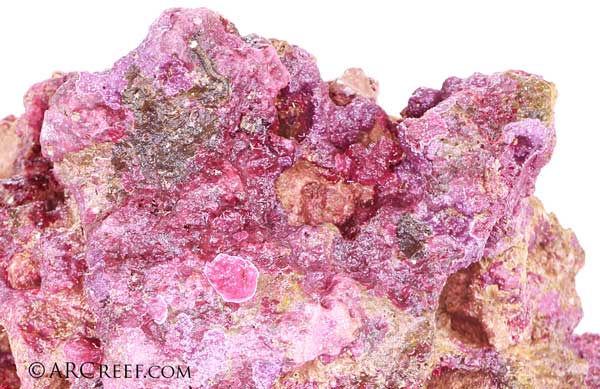 Coralline Algae and its Role on Live Rock

Coralline Algae is a red algae in the order Corallinales. It is an encrusting algae. There are over 1600 known species to date. The colors of these algae are most typically pink, varying shades of purple, and red, but can even be green, yellow, blue, and white.  It is found in every ocean in the world and from inter-tidal zones that are exposed at low tide, all the way as deep as 1,000 ft.   Coralline Algae is a slow and steady type grower, but its growth rate is approximately 10x’s more rapid in tropical waters than in the Arctic. At first glance, you may take note of the pretty colors, almost like an artist came along and left some abstract pink and purple brushstrokes all over the live rock. While Coralline Algae is a colorful component and adds to the overall aesthetics of your live rocks, it plays an essential part in reef health in a closed tank ecosystem.

Coralline Algae will not appear in a tank or closed system on its own like other nuisance algae.  It must be introduced into your aquarium, usually from purchased Live Rock or scrapings from a friends tank.  High-quality Live Rock will have dozens of different species and colors of Coralline, all competing for space on the rock.

When you first place Live Rock into a new aquarium, the Coralline Algae may darken a bit due to the stress of being transported and the shock of new water chemistry. This usually lasts just a few days.  You may also notice some white patches,  this is all normal and the vibrant colors will return again.  Coralline Algae will grow in all different lighting, temperature, and water ..  With over 1600 different species, every species has it’s own preference though.  So while your live rock comes with many different species on it,  each species has its own preferred environment.   Some species will like it bright and hot, while others will prefer the shady underside of a rock.  They will eventually hash it out among each other on who will take what section of each rock, and sometimes a few species will want to try to claim it all. This negotiation process (and sometimes battle) for tank real estate leads to why your live rocks will change colors over time.  If you are trying to seed a new tank, Coralline Algae will seed faster with higher flow, higher temps, and by scraping some of the rocks with a butter knife or flat head screwdriver.  For more information on Coralline Algae visit our  Guide to Coralline Algae.

There are many types of Live Rock available for the saltwater aquarium hobbyist some are wild collected and other types are farm raised or aqua-cultured. Below are a brief description of the most commonly found types.

The most common type available.  Porous and lightweight. Fiji Live Rock varies vastly from one supplier to the next.  Some re-sellers get it air shipped but the price usually skyrockets.  Most Fiji rock is boat shipped and can spend up to 30 days in transit before arriving in Los Angeles International Airport.  All Fiji rock requires curing.

Very dense which reduces the variety of life that can live within it.  Interesting shapes and good for building vertically in the tank. Can make a nice addition to other rock but not recommended as the only type of Live Rock in the tank.

This is a fairly new type of live rock that comes from Fiji.  It i